Brooks Koepka wins his 4th Major Championship and is the #1 player in the world!
Brooks won the Minor League Golf Tour Championship in 2012
Sunday, May 19, 2019 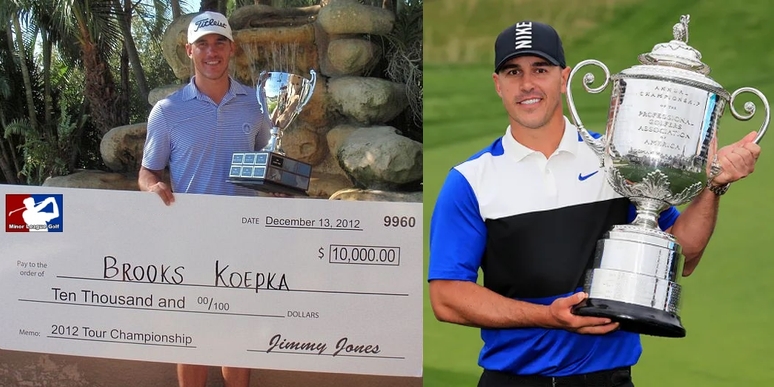 2012 Minor League Golf Tour Champion Brooks Koepka wins the 2019 PGA Championship at 8-under par 272 (63-65-70-74). He built up a seven shot lead entering the final round. However a back nine charge from Dustin Johnson and a tough stretch for Brooks cut his lead to 1 with four holes to play. Solid play coming in resulted in a 2 shot win and Brook's 4th Major Championship. This win also makes him the #1 golfer in the world!

Right out of college Brooks went over to Europe to compete on the Challenge Tour. Brooks won 4 Challenge Tour events in less than 2 years between the summer of 2012 and the end of 2013. By winning 3 Challenge Tour events in 2013, he earned his European Tour card for 2014. He wasted no time and won the Turkish Airlines Open propelling him onto the world stage. He then finished 4th in the 2014 US Open which earned him a PGA Tour card for the 2014-15 season. He then won the Waste Management Phoenix Open in 2015 which helped qualify him for the 2016 Ryder Cup team.

While Brooks was home from traveling and playing on the Challenge Tour in 2012, he won the Minor League Golf Tour Championship in December 2012. In fact, he played 8 events on the MLGT and won 4 of them!

The Minor League Golf Tour is proud of all your success Brooks. Keep it up!