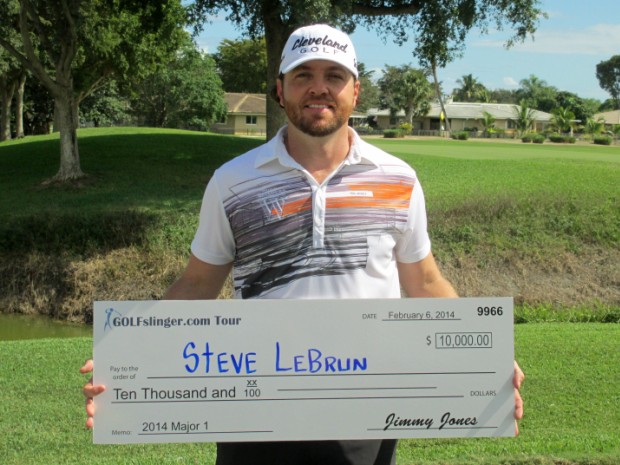 CORAL SPRINGS, Fla. – Steve LeBrun of West Palm Beach, on the brink of elimination after 29 holes Wednesday, rallied with a course record 61 Thursday to win the first “major” of the season on the Golfslinger.com Tour.

It was his career record tying 38th Golfslinger victory but his first since November, 2011. LeBrun has been playing on the PGA and Web.com tours the last two years. He received $10,000 from the $41,040 purse, raising his career Golfslinger earnings to $116,394.

But he almost didn’t make it. Through 11 holes Wednesday, LeBrun was 2 shots outside the 36-hole cut line for the low 33 percent and ties from the starting field of 76, which fell at two under par 140. LeBrun birdied the 12th, 13th, 16th and 18th holes for 67, but still trailed by six. He followed Thursday with a 10 under 61 on an eagle, nine birdies and a bogey for 199, winning by one shot. In 54 holes, LeBrun made an eagle, 16 birdies and four bogeys.

First round leader Chris Scialo tied for second place with Tyler McCumber, 1 shot back of LeBrun. McCumber got in to his first GOLFslinger event as wait list player when a player pulled out of the event on Tuesday Morning.

Sunny Kim at 10-under par (66-66) leads by 1 shot after 2 rounds
Brad Adamonis, Tyler McCumber, Jason Parajeckas and 1st round leader Chris Scialo are 1 shot back

CORAL SPRINGS, Fla. - Sunny Kim fired a second consecutive 66 to lead the Country Club of Coral Spring Open by 1 shot over Brad Adamonis, Tyler McCumber, Jason Parajeckas and 1st round leader Chris Scialo. The cut ended up at 2-under par, so with ties, 40% of the 76 player field will play the final round on Thursday.

CORAL SPRINGS, Fla. - Chris Scialo of New York shot 5-under par on the front nine on his way to a opening round 7-under par 64.  Scialo leads the Country Club of Coral Spring Open by 2 shots over Sunny Kim, Tyler McCumber and Jon McLean who are tied for second place at 5-under par.

The first Major of the 2014 GOLFslinger Tour season is a 3-day tournament with a cut to the low 33% of the field and ties after the second round.