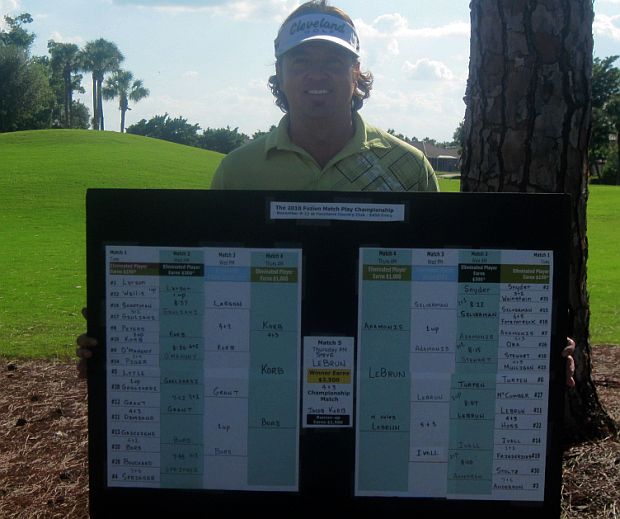 LAKE WORTH, Fla. – Steve LeBrun of West Palm Beach made eight birdies on his last 11 holes Thursday enroute to a 4 and 3 victory over Jacob Korb of Newtown, Pa., in the finals of the Fuzion-Minor League Golf Tour’s fourth annual match play championship.

Korb led by one hole twice early in the match on the South course at Fountains Country Club, winning the first, losing the third and winning the fourth. Then LeBrun got hot with birdies at Nos. 5, 6, 7, 9, 10, 12, 13 and 15. The match ended when LeBrun two-putted from 25 feet for birdie and a four-hole lead with only three to play.

In the semifinals Thursday morning, LeBrun beat Brad Adamonis of Dania with par-5 on the first extra hole, and Korb defeated Jeff Bors of St. Simons Island, Ga., 4 and 3.

There were 40 hopefuls for the 32-man draw in the qualifying round Monday. The co-medalists at 68 were Jesse Larson of Mendon, Vt., and Vaughn Snyder of Massillon, Ohio. Larson was awarded the top seed on a match of cards and advanced to the third round before losing to Korb. Korb had ousted defending champion Greg O’Mahony of Tequesta in the second round. Snyder was eliminated in the second round.

SOUTH COURSE; Monday's 18 hole Seeding Round will determine the 32 players and altrnates. All players who do not get to play in Match Play will be refunded $150 of $450 Entry Fee.