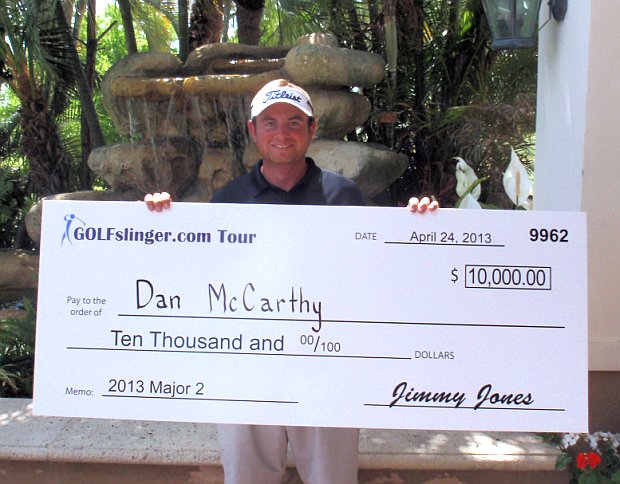 JUPITER, Fla. – Dan McCarthy of Syracuse, N.Y., won a playoff with 2 birdies, then a par-4 on the third extra hole Wednesday at Abacoa Golf Club to win for the ninth time on the Golfslinger.com Tour. McCarthy collected $10,000 from the $31,781 purse, raising his career earnings to $41,185 since he first played on the Golfslinger Tour in October, 2007.

Playing in Golfslinger’s second “major” of the season, McCarthy, 27, outlasted Ryan Armour of Jupiter, Eric Cole of Orlando and Greg Etimos of East Islip, N.Y., after they tied at seven under par 137. Etimos was the first round leader with 66. The other three matched rounds of 69-68.

In the playoff, all four birdied the par-5 10th hole, then Armour and Etimos were eliminated at the drive-able par-4 11th when Eric Cole and Dan McCarthy made birdies. Cole's eagle chip (with the flag out) hit the back of the hole solidly, ending up a few inches from the cup. McCarthy's 18 foot eagle putt finished just to the left of the hole. At the par-4 12th, Cole hit a tree off the tee and had to punch out to the fairway, resulting in a bogey 5. After a middle of the fairway drive and solid approch shot to 8 feet, McCarthy then two-putted for the win and $10,000 winners share.

In regulation, McCarthy had three birdies Monday, five birdies and a bogey Tuesday.

JUPITER, Fla. - 16 out of 61 players are under par after the opening round of the second GOLFslinger.com Tour Major of 2013. Greg Etimos blistered Abacoa with a 6-under par 66 in extreemly windy conditions, followed by Andrew Pressentin and Jeff Hatton at 4-under par 68.  Five players are tied for fourth at 3-under par 69.  The winner will take home $10,000!

If you have qualified during the Major Ranking Period you pay $590, otherwise you pay $690. Read the front page of website for all details. $10k to Winner