Justin Peters makes 5 consecutive birdies to start the back nine, wins by 2 over 1st round leader Daniel Obremski
Peters finished at 12 under par for the 36 hole event
Thursday, October 23, 2014

JUPITER, Fla. – Justin Peters of Stuart earned some traveling money to second stage qualifying for the Web.com Tour with a two-stroke victory on the Golfslinger.com Tour Thursday at Abacoa Golf Club.

Peters shot 68-64—132 to overtake Daniel Obremski of Pittsburgh, Pa., the first day leader, who posted 64-70—134. Peters totaled 13 birdies and had one bogey Wednesday. Obremski made two eagles Wednesday, five birdies and a bogey each round and a double bogey Thursday.

Both Peters and Obremski passed first stage qualifying last week at Breakers West in West Palm Beach. Peters will go to second stage next month at Hombre in Panama City.

Coincidentally, both Peters, 37, and Obremski, 27, won their first Golfslinger Tour starts. Peters’ first victory was in September, 2006, at the Florida Club in Stuart. Altogether, he was 40 wins and career earnings of $122,276, including $1,555 Thursday. Obremski started with a win in March, 2012 at the Champions Club in Stuart. He now has two victories and the $1,100 he received Thursday boosted his career total to $12,871. He was beaten in a Golfslinger playoff Monday at the West Palm Beach Golf Club. 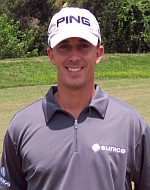