LAKE WORTH, Fla. – Derrick Sherard of Louisville won a battle of Kentuckians on the Minor League Golf Tour Tuesday by beating Brian Fister of Lexington by two shots, 68 to 70, at Winston Trails Golf Club. Neither had won an MLGT event heretofore.

Presented by Golfslinger.com, the MLGT’s eighth tournament of the year drew 33 starters and returned $3,993 in prize money. Next on the schedule: Thursday at Martin Downs Country Club in Palm City. 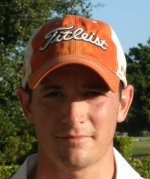