JUPITER, Fla. – Two teams playing three different formats without making a bogey tied for first Tuesday in the Golfslinger.com Tour’s sixth annual Par-3 Team Trilogy at Jupiter Dunes Golf Club. The 25 twosomes played modified alternate shots on the back nine, a scramble on the front nine, then returned to the back nine for a four-ball stroke ball event.

Nicole Sakamoto made a Hole-In-One on the 155 yard #7 (16th hole) with a 5 Iron. Nicole and Alvin Okada did not get in skins and everything else was halved so we followed tour policy and went to least birdied holes. Only 2 teams birdied the 19th hole of the tournament (the 1st best ball hole) and all other holes were halved at least three times. The teams of Kristian Caparos/Josh McCumber and Scott Davidson/Shawn Adamczyk split the $880 skins pot, $440 per team.

The Golfslinger.com Tour completes its 11th season with the Holiday Team Championship Thursday at Atlantis CC with its 121st tournament of the year. It will be event No.1,199 since starting in August, 2004. The 12th season opens Jan. 12 at the TPC Eagle Trace in Coral Springs. 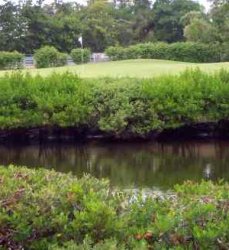