After they tied at five under par 67, Jimmy Lytle of Ocean Ridge was eliminated when he bogeyed the par-4 first hole, missing a six-foot par putt; DeHaas and Corey Henry of Boca Raton matched birdie-4's at the second hole; then De Haas two-putted for the win after Henry missed his 15-foot par putt.

Lytle and Henry, who tied for second among 19 starters, received $405 apiece. Lytle is the MLGT’s all-time leader in wins, 47, and money, $176,635.81. Henry has played the MLGT since May, 2010, and is still looking for his first victory. In regulation, Lytle eagled the par-5 11th hole and added four birdies and a bogey. Henry had six birdies and one bogey.

The MLGT plays a 54-hole tournament Monday through Wednesday at Jacaranda GC-West in Plantation, then three one-day events the following week before taking a two and a half week summer break. Play will resume July 13. 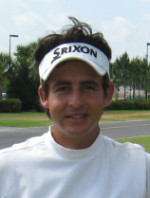