JUPITER, Fla. – Mark Purrington of Dartmouth, MA, survived a bogey on his last hole Wednesday to capture his first victory on the Minor League Golf Tour. Purrington made seven birdies and had a bogey at the par-3 sixth hole before his mis step at the par-4 18th to finish at five under par 67 at Jupiter Country Club. He received $750 from the $4,120 purse, raising his career earnings to $4,197. Purrington was a MLGT regular in 2013-14 and returned to South Florida earlier this month after working the past couple years in Hawaii.

Tied for second at 69 among 34 starters were Michael Chipolone of Boca Raton, FL and Nicholas Huggins of Marietta, OH, each with five birdies and two bogeys, and Sunny Kim of Queens, NY, who also had five birdies but made double bogey at the par-3 second hole.

The Minor League Golf Tour's Match Play Championship sponsored by Amino VITAL is less than 3 weeks away. It is one of the most popular events of the year so don't miss it. It will be staged on the Estates course at PGA National this year November 6-9. Monday's 18 hole Seeding Round will determine the 32 players & alternates. All players who do not get to play in Match Play will be refunded $175 of the $475 Entry Fee. Amino VITAL is adding $1,000 to the purse! Any questions call Tournament Director Scott Turner at 561-598-9630. 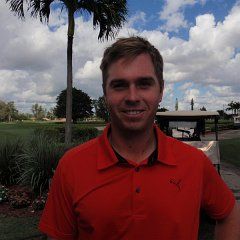