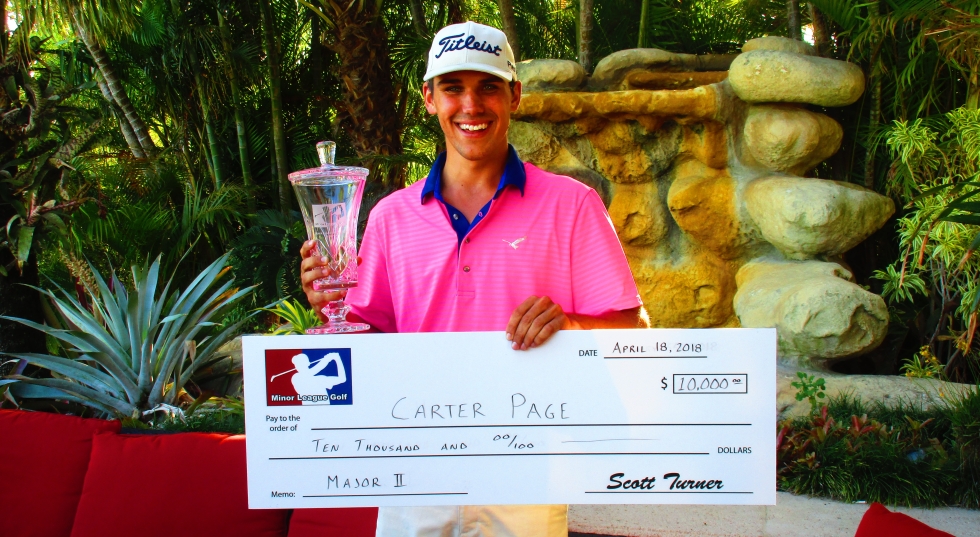 JUPITER, Fla. – Carter Page of Waynesville, NC, making just his eighth start on the Minor League Golf Tour, was a winner for the first time Wednesday. Page shot 69-63—132 at Abacoa Golf Club to win by three strokes. His best finish heretofore was a tie for fourth last July, also at Abacoa.

Page, 23, made 5 birdies and 2 bogeys Tuesday, 2 eagles and 5 birdies in a clean round Wednesday. He received the guaranteed $10,000 based on 65 entries. There were 83 starters in the MLGT’s second Major of the year.

Olin Browne Jr. and Matthew Stephens tied for first in the 2nd Day Shootout with scores of 65. They each earned $308.50 for their great 2nd Day score.

A big thank you to Abacoa Golf Club for hosting this event. The greens were great as always and the course provided a great test for the players.

Six players are tied for the lead at 68 after Day 1 of Major II
Ryan Crowley, Jordan Gumberg, Kyle Kmiecik, Rasmey Kong (a), Mike Miller and Kevin Talty (a) all shot 68

JUPITER, Fla. - Six players are tied for the lead at 4-under par 68 after Day 1 of Major II at Abacoa Golf Club. Ryan Crowley, Jordan Gumberg, Kyle Kmiecik, Rasmey Kong (a), Mike Miller and Kevin Talty (a). Two of the six co-leaders are amateurs. The last time an amateur won a Major on the MLGT was in April 2015 when Hugo Bernard shocked the pros shooting 124 (61-63) and won by five shots.

42 players are within 4 shots of the lead at even par or better. It is sure to be an exciting finish.

There was one skin out on Day 1 worth $980. Click on any of the $ links under the skins/total column to view the skins results.

There is an optional 2nd day shootout for players that shot 73 or higher on Day 1. The entry is $75 and 100% of the entries go into the purse. The top 33% and ties earn a check. You must register and pay online for the 2nd day shootout before play starts on Day 2. No exceptions. 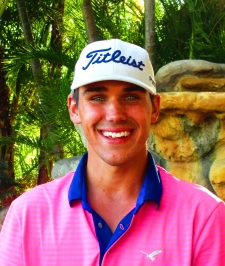